When talking to school stakeholders about implementing Breakfast After the Bell, “we led with our district mantra: it is what’s best for our students and with that everyone got on-board,” said Dan Oberg, Director of Business Services for Wheeling Community Consolidated School District 21.

Four of the thirteen schools in the Wheeling School District are impacted by the new Breakfast After the Bell law. Those schools have close to 80 percent of the students eligible for free or reduced-price meals.

Breakfast in the Classroom started in October for the four schools.

The Process:
Prepackaged breakfasts, milk, and juice are packed in coolers with a class roster. Coolers are then delivered to a common location in the building. When students or teachers arrive in the morning they take the cooler to the classroom. Teachers call students up to grab breakfast then mark off those who took a breakfast. Once the class has had breakfast students bring the coolers to the cafeteria.
All coolers are filled with breakfasts for the number of students in that classroom. If students arrive late their breakfast will be waiting for them in the cooler. 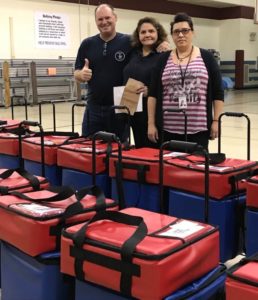 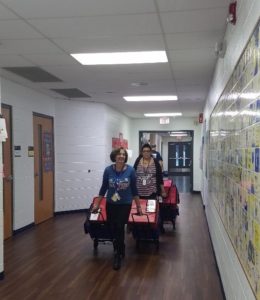 Staff taking coolers to designated areas for pick up

“We would not have transitioned to Breakfast After the Bell if it wasn’t for the state law but it was the best thing we could have done. Now that we have started the program we can see how many students we are impacting. It was something that was needed that we were not aware of,” said Oberg.

All four schools started utilizing the Community Eligibility Provision (CEP) this year, so all those students eat breakfast and lunch for free. “We knew that if we were going to implement a Breakfast After the Bell program in those schools we would need CEP. If we didn’t have CEP it would have been a logistical nightmare,” said Oberg.

The Community Eligibility Provision (CEP) is an option of the United States Department of Agriculture (USDA) funded School Nutrition Programs administered by the Illinois State Board of Education that makes it easier for schools and districts to provide reimbursable free breakfasts and lunches to 100% of their students.

With CEP You Can:

Oberg credits communication as the key to getting buy-in from school stakeholders. “Keeping everyone involved has helped facilitate a smooth transition. Breakfast After the Bell has become second nature in those schools.”